What’s at the Gilbert Museum?

Do you remember driving by the Gilbert Museum? Wonder what’s inside? Is it open for business?

This museum tells the quirky stories of a small hay town that grew into Gilbert Arizona. 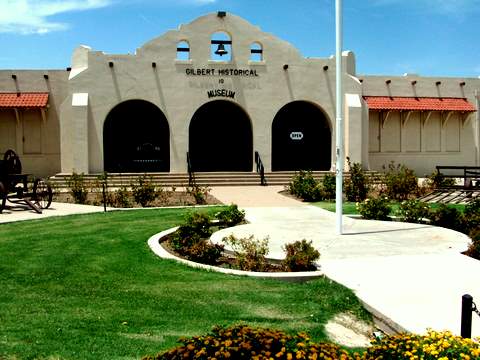 It was a hot day in the summer, clear skies and low humidity. Kind of perfect for growing hay. It was time to check out this museum that looked closed but was open for visitors.

Here you will find out how Gilbert Arizona used to be the known as the “Hay Capitol of the World” and how it got its name.

More about that later.

First thing you notice on the outside is the memorial to the various wars that Gilbert area residents were involved.

Gilbert residents not only went to wars but also got involved in the war effort at home.

Like working the POW camps in Arizona. Like working at the Army Air Corps Training Center at Williams Field.

Step out of the hot sun and into the shade of the entry porch. Look at an old red fire engine on one side and a black Model T type car on the other. Walk closer and notice the emblem on the fire engine, it says “REO SPEED WAGON.” Say, that sounds familiar, isn’t that the name of some band?

Well this is an original REO SPEED WAGON from 1929 and it came from the man who founded Oldsmobile. Wonder how it got named? It comes from a man named Ransom E. Olds, and as you can see, REO are his initials. And now you know where REO SPEED WAGON came from. 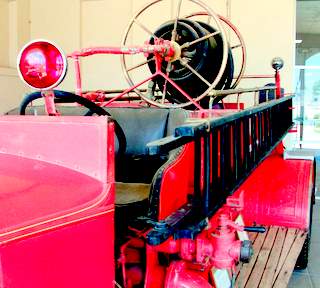 The Gilbert Museum building used to be an old schoolhouse. Walk inside and take a look at the things in the rooms that used to have school children. The museum looks and sounds creaky just like the Mesa Historical Museum.

Pick up a map on the way in, or just look at the sign above the door.

Check out the Military room where you can see old uniforms and posters like this vintage WW 1 Navy poster.  Interesting thing is the model on the poster is the artist's wife. 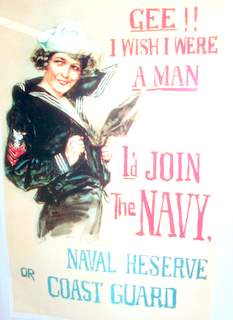 Here you will find out that Arizona had 20 POW camps!

One was located on a ranch at Baseline and Mesa Drive!

Read the story of how a Gilbert woman worked at this POW camp.

Evidently this one housed Yugoslavians and Czechoslovakians.

The POW’s worked on the farms because so many farm hands were gone to war.

Since you are dying to find out how Gilbert got named the Hay Capitol of the World, let’s say it got the name because of the soil, water, and lots of sunshine. And lots of hay. And access to the world by rail. That was the key.

Anyway, by 1916 this town of Gilbert shipped more hay by railroad than anywhere else. And became the Hay Capitol of the World. Which brings us to the story of how Gilbert got named.


How Gilbert got its name

If you thought that Gilbert was named after a historical man named Jedediah Gilbert or some other old-sounding name you wouldn’t be far off. There actually was a dapper looking man named William or Bobbie Gilbert. He moved to the Mesa area around 1882 and later bought some land when it was going for $1.25 an acre!

The railroad needed access to all the hay that was grown around here. So they asked a land owner for access. Bobby Gilbert agreed, as long as he got a station on the property named “Gilbert.” At least that’s one story. Later the town of Gilbert was incorporated in 1920. And that’s how the town of Gilbert got its name.

The courtyard with old farm equipment

If you have time you can wander out back in the courtyard and look at the old farm equipment. You can see a bright green John Deere cotton picker from the 1950’s that was restored as an Eagle Boy Scout project. 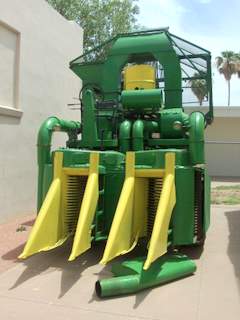 Here’s a fine looking hay wagon on the rear of the property. It’s a ’46 Chevy 2 ton Hay Truck. 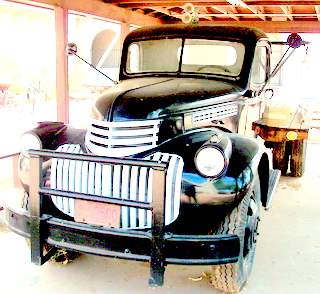 The art of quilting is still alive. Walk into the Home Life Room and you might see someone working on a giant quilt.

See a stone for grinding grains for food.

These objects were found around ancient water canals and are thought to be from the Hohokam.

If you want to see and walk through some of these prehistoric water canals go and visit the Mesa Park of the Canals.

Where is the Gilbert Museum?

The Gilbert Historical Museum is located in the Heritage District of Old Gilbert. It is located at 10 S Gilbert Road. The sign out front gives the hours they are open: Tues thru Sat from 9am to 4pm.  Their website is: http://www.gilberthistoricalmuseum.org/

You can run though it fast and have plenty of time to eat at one of the nearby Gilbert restaurants like the Euro Cafe or Joe's BBQ.